Using Etoys, we had to make different races using our drawn cars. The speed of the cars have to be random, so their speed ill change every second. The race I thought was the best was the Great Race.
The great is a race which consists of 4 cars, a timer and the stop, start and restart labels. The aim if this project is to get the 4 cars to race around the track, but the winning car has to be random. If a car finishes the race, the rest of the cars and the clock have to stop.
At first, the race was quite hard to get, and took awhile to finish. It needed a lot of time and work to finish it. Especially setting up the start, stop and reset buttons, you just keep on repeating yourself, getting the scripts from each car took ages. Making the script for the random speed was the step I liked most, because it was the easiest, You only had to make a new script called ‘speed’ and add it to the cars script, add random to the speed script and your done. Other scripts like the turning and stopping when reaching the finish line was confusing and took awhile, because you had to keep finding the right scripts in the other cars.
After a while, I was almost done, I just needed to finish the last car when the USB crashed, and all my work was deleted T_T. So I had to restart my work, BUT then my work didn’t save again, so my work was lost again, and that’s when I gave up.
After a Week or 2, I tried again with my Rage of The Great Race within me, and finished the Great Race this lesson =D. So I’m so proud of myself but lost one mark because my track was circular. So overall, I liked the Great Race challenge, it was challenging and fun. 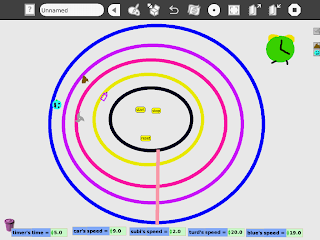 Posted by Captain Awesome at 5:57 PM No comments:

On Wednesday the 4th, Mr Kerr told us to try out some activities on Sugar that he downloaded. There were a variety of games which were all pretty fun, like Typing Turtle (a game that teaches you how to type faster), Food Force (a game where you build a town), Arithmetic (a maths game), and much more. But there was a game that was fun, challenging and interesting. It is called Gcompress Traffic.

Gcompress Traffic is a game where you have to move various blocks to allow your red block move to the destination. This game requires you to use your brain skills and eye skills to find out how to get the red block to the other side.

The bad thing about this is game is that it doesn’t have as much levels. It also doesn’t let you play a stage again. Many people didn’t notice this but, I found out that if move piece up and down or left to right rapidly non-stop, the piece will move out of place, making it a bit like a glitch.

Overall, I enjoyed this game. Who wouldv’e knew a small little activity could be so fun and addicting, so If I had to give it a score out of 5, I would give it 4 out of 5. 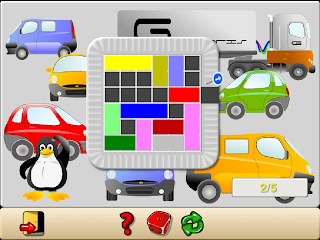 Something Everyone Must Know

I'M AWESOME!!! ALEX IS AWESOME
Posted by Captain Awesome at 6:18 PM No comments:

Mr Kerr has recently teaching us how to hack 'Sugar'. It's quite hard to understand and difficult to understand at first, but after a practise, hacking sugar became much more easier.

Mr Kerr taught us how to hack into 'Sugar' and change the wallpaper. But, before hacking, we had to make our own picture using html(hyper text markup language) kit. We created the image and saved it as a SVG( scalable Vector Graphic ). I chose to make a flower, it was quite hard to make the petals, but I finished and it looks quite alright. After making the image, I saved it onto MY usb and then opened 'Sugar'. When I first tried, I didnt get the picture, instead, I got an invisible picture as my wallapaper in 'Sugar', so i tried again and again and again. but it never worked, until Mr Kerr offered me some help (such a nice man ><) and got it to work, and the problem was the name file of my image, the name was 'flower.SVg' which didn't work, so mr Kerr changed it to 'flower2.svg' which worked =D I was so happy that it wasn't me who made a mistake in 'Sugar' hacking, it was just the file name. I had great fun learning how to hack into 'Sugar' and wish to learn more, I felt like a real computer pro =D On the way, I picked up some languages in 'Sugar' like 'mv' meant move, 'rm' meant remove, and you must become a super user first, this is done by typing su -l. 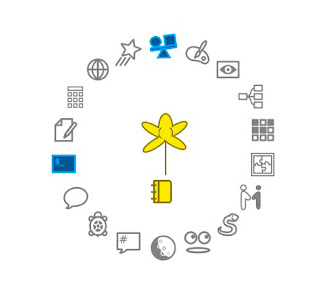 Posted by Captain Awesome at 5:44 AM 4 comments:

Today we had a guest speaker named Joel Stanley, Mr Kerr told us Joel will not be talking to us like otherguest speakers, instead, we had to ask him questions and he would respond. So it was pertty weird and funny because everyone sat there, all quiet and thinking bout questions, but after a few minutes, people staretd asking questions. By the end of the double lesson, I learnt interesting stuff about him and what he does.

Joel Stanley works on XO's, he helps test and experiments thigns on the XO's to see if there is any problems or improvements. Joel became a computer engineer because when he was in yr 11, he wen on a tour in different universities and ofund interest in Computer Engineering.

When he graduated, he worked at a place called MIT ( Massachusetts Intitution of Technology).
This where very smart people in technology come to work. The game Guitar Hero started from MIT. Joel and his friends like to go on the net and read neardy web comics called Xcase.

One of the students asked him if he likes linux better or Windows better, and his answer was Linux because he think windows is annoying, and also Linux is free to customize and free download.

About XO's: Joel said that XO's are pretty much shock proof, only 1 in 500 break. He shows us ademonstartion of him dropping his Xo onto the floor, and nothing happened! XO's are built to withstand the heat in some countries. XO are also water proof, crumb proof ( meaning little things like small rocks, dirt or sand can't get into the XO). XO's can connect to the wireless interent because it has little antennas on it, which is located on the little green bars which is to close and open the XO. The antennas also have rubbery outside to protect it if someone drops the XO. Xo is built to consume only aliitle bit of electricity of tehe battery, beacuse in poor countries, the electricity is limited. The part of the XO that consumes most of the electricity is the monitor. This is because it luminates, which takes alot of power.
XO's aren't available to the oublic because the amount of money needed to produce and and market and because he XO was intended for one child in a poor country.

So this is what I found out during that lesson. Interesting fact: Joel Stanley learnt how to touch type from msn. 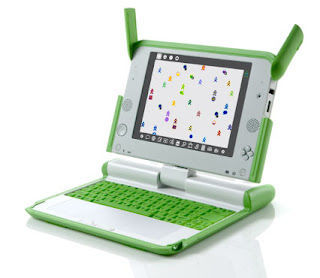 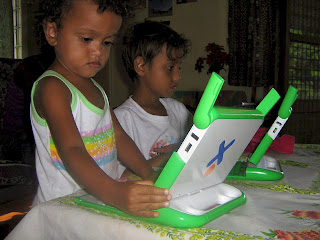 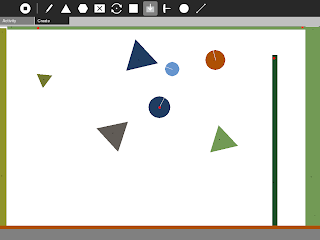 Today I played with the physic game activity. I tried using all the shapes and tools and made a game out of them. The point of my game is you have to throw a circle in the rectangle box on the side. The hard thing about it is it has triangles and circles spinning, making the circle fly around when it touches it. I really had fun with the Physic game and I wish to play with it in the future.
Posted by Captain Awesome at 10:31 PM 1 comment:

David and Rosemary- Trip to Timor

Today during our Control Tech lesson, we had visitors named Rosemary and David. They came into our class to talk about their trip to Timor and things about the XO. Rosemary (the one who talked to us) told us things about current issues about Timor and why they are sending over XO’s.

The first issue is Timor used to be Portugal, but then they left, letting the Indonesia take over in 1975. They left after a few years in 1999. Portugal is a common language in Timor, but there is also a local language called Tetun. The word ‘Mallai’ means ‘white people in Tetun. ‘Mallai’ isoften said to foreign people, people who aren’t born in Portugal.
Timor experienced recreational revolution in 2006; a civil war was going on with people killing each other. There were other wars too, that led to a lot of destruction. Since then, Timor has had a lot of trouble with food, resources and electrical things. The housing in Timor is quite severe, as most people live in huts made out of coconut leafs and logs with no flooring like carpet, and no electricity. Some lucky people, like the family Rosemary and David lived with, had a nice and cosy home, with chairs, lights, sofas etc.

The transport there isn’t as bad. Most people there use motor scooters which you can buy for $2.50 U.S dollars to fill up. The currency in Timor is U.S dollars because they currently do not have a currency. It is very expensive to refuel the scooter.

Now this is where David, Rosemary and the XO come in. David teaches the locals how to program phones through the internet, and to my surprise, the people there have never seen a phone before. There are mobile phones there, but it is a rare thing to see someone with it because it is very expensive. And the spending fee is also very expensive. So people who buy it only use it for a cool factor or to receive calls.
23 people volunteered to join and learn how to use the XO from David. The Xo is waterproof, shatter proof and won’t let crumbs get into the keyboard. It also uses low battery usage, so kids can use the Xo more since there is very low electricity in Timor This is a very good thing because kids will sometimes accidentally drop it. The Xo also has eBook which allows them to download books through the internet for them to read. Since the missionaries (the people who are helping) want to give every kid an XO, they must teach the teachers how to use the XO before they can teach the students.

Another good thing is that there are nuns that run a program to help girls get a job somewhere outside of the city. The nuns have 40 bedrooms and they pick girls ages 12-15 to come and learn. The girls are taught hospitality, book keeping, cooking, and computer lessons in the evening. The girls stay there for 9 months, then a bunch of girls come in.

This was a very good and interesting lesson for me. I was really interested in the story; it makes me feel very guilty for having a nice home, food, games electricity, good school etc. I hope I can help donate money to them in the future.

Here are some of the pictures that were taken by David and Rosemary.